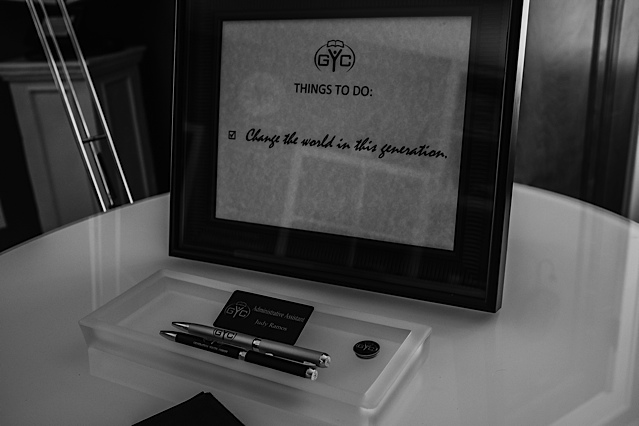 CAMPUS is the birthplace of GYC. It also houses the GYC Headquarters & Office.  Under the leadership of President Justin McNeilus a major effort was developed to establish a GYC Gallery.  Judy Ramos is currently the Administrative Assistant for GYC.  She has also served in various other roles including the first vice president of what are now known as the Programming and Logistics Departments.  She was responsible for putting together the gallery that displays the first decade of GYC’s history.  The GYC Gallery includes various artifacts, including VHS and cassette tapes of the first messages, a collage of all the previous promotional materials created by Kimberly Shin (GYC PHD Volunteer), a timeline of events as told by Amy Sheppard (General Vice President), a world map depicting GYC’s global impact, and much more.

For the first time since the formation of the GYC Board of Directors, the highest governing body of GYC returns to the headquarters for its final meeting before the annual conference.  GYC’s newly appointed president, Natasha Neblett will be in attendance even though she doesn’t formally take up her responsibilities until January 1, 2014.

We are including a photojournal of a few of the items that the board and any visitors to the office will see. This door sign was first purchased when the GYC office was located in Ann Arbor, MI at the Guy’s CAMPUS House.  At that time, GYC was the General Youth Conference.  Actually, the complete name was longer.  To find out what it was, you’ll have to look through the scrapbook. It’s time to change the world… The Spirit of GYC was primarily authored by Chester V. Clark, III in cooperation with other board members soon after the conference in Ann Arbor, MI.  It is one of the most brilliant statements of identification written among Adventist youth organizations.  After only its second year of existence, people and organizations were seeking to define what GYC was.  This statement was created to bring clarity to who we were as an organization.  Instead of titling the document “Statement of Beliefs” — the board chose “The Spirit of GYC” because of its softer tone. The gallery portrays the history of GYC while also giving tribute to the people that God has used to advance its success.  Volunteers are one of the greatest assets of GYC.  Many “nameless” young people are only remembered by the orange flags they wave to direct people in lunch lines.  Other noteworthy items in the picture include: the first GYC Promotional DVD, FaithTrip with Andy Im and Weimar students, and the first GYC-sponsored 5k in Seattle in conjunction with Team Revolution.  Also, the picture in the top right corner powerfully captures sign language services while Pastor Kameron DeVasher preaches in an evening meeting.

One of the most memorable times in Justin McNeilus’ presidency was the interview in Kentucky with the General Conference’s vice presidents.  Intertwined with Justin’s tenure as president was the presidency of Ted Wilson.  To-date, President Wilson has done more than any other president in recent history to empower young people around the world to advance the work.  In his first five years as president he has traveled the world visiting, encouraging, and empowering young people to spread the Gospel to their sphere of influence. GYC Evangelism started in 2004 at the Sacramento, CA conference.  Soon after, Justin McNeilus came in as the first Vice President of Evangelism — a position he held until his appointment to the presidency.  GYC hired buses to take young people throughout the city of Chattanooga to get Bible studies and pray with people. A Tree of Blessings The first GYC sign was donated by Tricia.  Jukes Namm, MD came up with: “An army of young people on a mission to proclaim the three angels’ message to the whole world…”  Later we added: “In this generation…” The evolution of the logo is depicted in the picture above and in the scrapbook pictures below. Israel Ramos and Justin Kim’s logo ideas.  These logos were made before Photoshop was commonly used among non-designers. In 2012 — ten years after the first conference, Sebastien was commissioned to write this poem.  The concepts he was asked to include were: recycling & revolutions.  Recycling because speakers and special guests were given care packages contained in bags used out of recycled GYC t-shirts.  Revolutions because that was the theme for the year.  It was a thoughtful and very powerful piece.